On Sunday March 22, I am presenting a Channel 4 Dispatches on supermarkets and the coronavirus. Below are some thoughts I wrote for Channel 4 about how this has happened and what happens next – some of which did not make it into the programme.

We are all living through strange, unprecedented times. People’s lives and livelihoods are at serious risk. Some towns and cities are starting to resemble a ghost town – with one notable exception: our supermarkets. 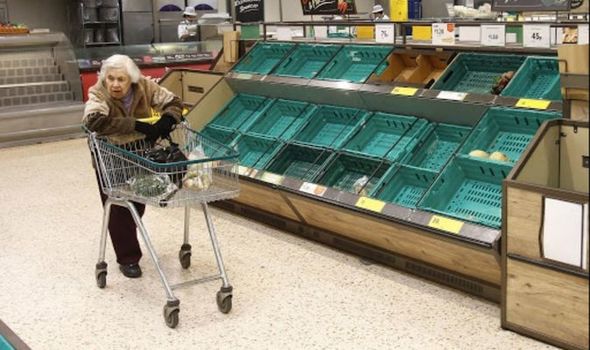 As a consumer journalist, I’ve been covering the supermarket industry for 20 years and I’ve never seen anything like it. It started off with just loo rolls and pasta being stripped off the shelves. But now it is almost everything: long-life milk, canned goods, but also meat, fruit and vegetables. Supermarkets have become devoid of goods. What is going on? Are the empty shelves a simple matter of consumers being selfish and needlessly stockpiling or is the industry set up in a way it just cannot cope with the crisis?

It is true that many shoppers have behaved thoughtlessly. People who can afford to have loaded up £300 worth of goods, just because they can. But speaking to shoppers who woke up to queue outside Tesco at 5.40am in Tottenham, north London, many insisted – correctly – this was the only way to secure some basic essentials for the next few days. They are not stockpiling, they are shopping and if they don’t arrive before 6am, the shelves will be stripped bare.

Also, according to official government figures 29% of all that we eat is consumed out of the home. A coffee or cereal bar on the way to work, lunch in a work or school canteen, a snack at your desk. And then there’s all the meals and drinks served by pubs and restaurants. That’s an awful lot of food. And now most offices, pubs, restaurants and schools have shut, all that food has to be supplied by us – ordinary consumers – in our own homes. We just need to buy more stuff. Be it a jar of mayonnaise, loaf of bread or pack of sausages. It’s putting huge amounts of pressure on supermarkets at the worst possible time.

The question is how can supermarkets cope? And what will happen next?

Investigating this for Dispatches, I have discovered that supermarkets are making radical plans to ensure the supply of food, drink and essentials keeps arriving at the supermarkets. Thousands of temporary workers are being hired, and those on the shopfloor are working tirelessly – occasionally while dealing with abusive customers. But that is just the start. The supermarkets are making plans to possibly shut some stores, so they can focus their resources on others. They are planning to use an emergency relaxation in competition laws to collaborate with once bitter rivals. Expect to see, possibly, Asda deliveries being trucked in a Sainsbury’s lorry, or Tesco sharing data with Morrisons.

They are also cutting back on the choice offered to consumers.

First, it was the fripperies – the deli counters, fish counters, cheese counters. But soon consumers should expect to see fewer items in store. We have got used to an unimagined level of choice in our supermarkets in the last decade or so. Morrisons sells 60 different types of pasta, Tesco sells 291 different types of cheese, there are quilted, luxury, budget and lilac-smelling loo roll. This choice is going to end – for now. We are going to have to get used to accepting a far more limited range of goods, be it just white bread and brown bread or two types of chicken curry, not five. Morrisons is launching a food parcel: spend £20 or £25 and get a box of about 30 items: milk, bread, rice and some chicken, veg & fruit. But you will get no choice what will be in the parcel.

This is going to be the new normal for the next few months.

There are two other important aspects worth considering.

The British supermarket industry has been lauded as one of the slickest in the world. But part of its success has been the development of something called just in time delivery. Supermarkets no longer have large stock rooms, with tons of baked beans or pasta sitting there that they bought weeks ago. Instead, the supermarkets expect their suppliers to deliver the stock – be it baked beans, pasta or bag of salad – to the supermarket distribution centre within days, sometimes hours of ordering it. The pasta or salad then gets trucked, by the supermarket, straight from their distribution centres to the shops, where they are put more or less straight onto the shelves. Indeed, supermarkets sell the salad or pasta to shoppers before they even have to pay their suppliers.

This business model generates billions of cash for the supermarkets. It relies on very few supermarket workers even having to handle the product; it usually arrives at the supermarket shelf-ready. But it means if there is a spike in demand – caused by some heavy snow, or there’s a heatwave – you suddenly see empty shelves. This is like a heatwave – but 100 times worse. The supermarkets don’t own any spare stock. They have no back up. They are entirely reliant on the suppliers getting the baked beans or pasta to the supermarket in as short as time as possible.

And it is this very efficiency that has been so drastically exposed by the COVID-19 crisis. What once made British supermarkets the envy of the world, has now made them scrabbling in the dark, struggling to keep up.

The other aspect worth mentioning is how reliant Britain is on its supermarkets. According to GlobalData, a market research company closely monitors the retail industry, £59 out of every £100 spent on food and drink in Britain is spent in a supermarket. That compares to £46 in Italy or £43 in South Korea, two countries where there were no serious levels of panic buying. The empty shelves at Tesco, Asda, Morrisons and Sainsbury’s is partly down to the fact we just rely on them so much.